Following the shows with Neil Young in the UK and Ireland, there have been multiple articles in the British press calling on Dylan to stop touring, because his voice is shot, he’s become a caricature of himself, etc. I have to admit that I don’t get it. If he has a good time touring and people want to pay to see him, what’s the problem? But then I have to say that I don’t get the point of much that passes for journalism these days.

I agree with this. Both Bob Dylan & Neil Young were never very good vocalists at any point in their respective careers. They epitomize the singer/songwriter genre. They’ve been able to continue their careers well past their prime because their singing voices were never the main attraction to begin with. Their songs were the attraction. Tom Waits is another example of this. These guys are loved & respected for their great songwriting, not their singing.

I disagree with this completely. All three of them have some of the best voices on the planet. They all have incredible expression. Maybe not conventional singers but because of that I feel they are greater singers than someone like Roy Orbison (just an example) who, while incredible, sang almost everything the same. Listen to Dylan on Blood on the Tracks or any Neil like On the Beach. Tom Waits, everything. So much nuance. I’ve heard people say they all can’t sing for ages and I think if that really were the case, they wouldn’t be the legends they are.

Which reminds me of what Woody Guthrie is supposed to have said after he met Dylan: he has a great voice, but I’m not so sure about his writing.

Agree to disagree. They can emote & sing with conviction but that don’t make it sound pretty. I’ll just say their voices work well enough for their style of music. I love all three of these artist by the way. I have every single one of their albums. But, I have to be honest, great vocalists they are not. I suppose the PC way to say it is “their vocal stylings are unique”.

Which reminds me of what Woody Guthrie is supposed to have said after he met Dylan: he has a great voice, but I’m not so sure about his writing.

Beavis & Butthead said the same thing about Tom Waits’ while watching the video for “I Don’t Wanna Grow Up”.

I don’t know how anyone can listen to something like this and say Bob could never sing.

Beat me to it

Bob Dylan: Live versions of all the songs from “Love & Theft”

Happy Birthday “Love and Theft”. Here are live versions of every track on this brilliant album. Mostly videos, but some audio as well.

Saw him last week, sounding good these days, you’ll have a good time!

Absolutely fantastic. The sound was pristine. The band was tight. The only problem was seeing a show in an arena. He started at 8pm sharp. No opening act. Lots of people came late and had to find their seats. Lots of talking. But, man, what a great show. He’s 78!

The slide guitar on Early Morning Kings is killer. 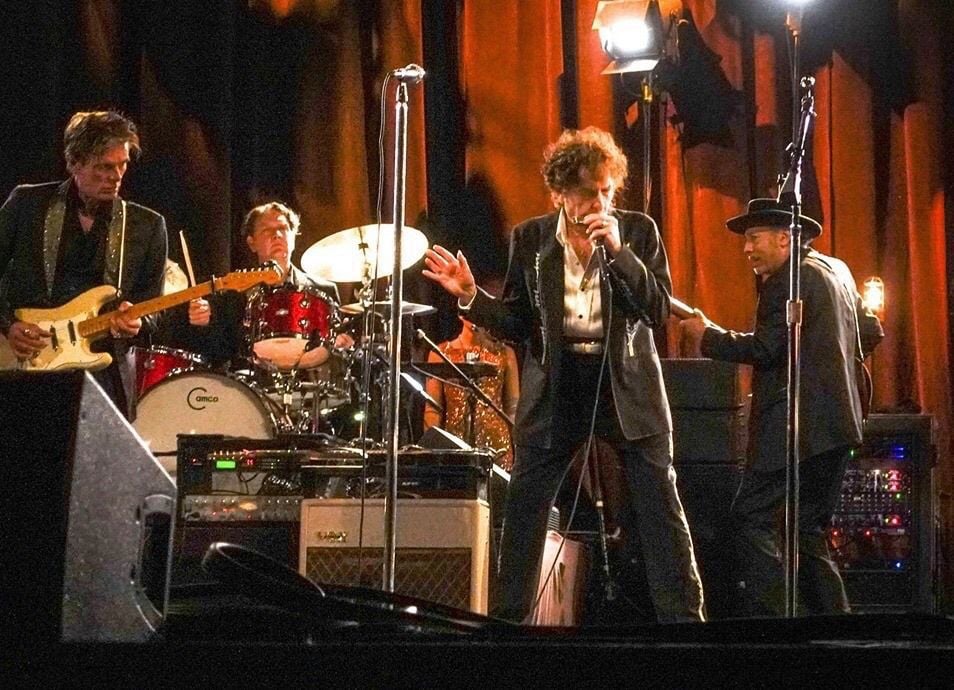 Dylan is Van Gogh. Van Gogh Is Dylan. In the Van Gogh book of letters and sketches are endless rough drawings - hundreds of working sketches of potato eaters, farmers, sowers, prostitutes, fishermen, weavers and endless attempts at sunsets, fields of flowers and on…all leading up to the final masterpiece paintings. The art begins wild, sometimes off balance, but ends up powerful and complete. I see the same processes in young Dylan in this release “The Cutting Edge.” The rapid song processes and number of resulting masterworks - it’s as unimaginable as the truth of Van Gogh painting three hundred great paintings in one year. We are granted a full-on vision of the artist in the studio. We listen to the young Bob Dylan starting and stopping songs. Renaming them. Starting over. Moods shift, titles change, awkward poetry is smoothed into art. He keeps carving (in a matter of days) until the masterpiece unfolds. Dozens. The obdurate shard Like a Woman eventually ends up becoming the epic classic: Just Like a Woman. Visions of Johanna survives dozens of off-base rock feels, until it glides safely home into a Beat, Rimbaud-influenced, love ballad for all time. And finally, the nail the point down here, Like A Rolling Stone survives days and days of rough transitions and dead-end turnarounds and young Bob blowing his voice out - to become the most important rock song of all time, with an opening snare drum call to attention that is the shot heard 'round the world.
Dylan is Van Gogh. Van Gogh is Dylan. We are perceiving art that is forged in deep time, created by possessed souls - and does anyone have the guts now to trek that wilderness road again? Batting away the vicious critical gnats and the boo’s? Certainly Dylan hammered the point home in his “Music Cares” speech. The bedrock of his art lies in the study, and assimilation, of ten thousand folk songs steeped in myth, deep poetics, and mystical melodies - which he borrowed heavily from and then carved into his own modernistic visions. There are no major young songwriters today capable, or willing, to do this heavy lifting. Welcome to the Dark Ages of song.