Over the weekend I decided to have the family over for a cookout.

I had bought a set of four pork roasts from Costco and had three left. They were pretty decent sized roasts and I figured three of them would barely fit in our new crock pot.

I rubbed them with extra virgin olive oil and rubbed pork seasoning rub mix all over the outside of the three roasts. I sliced up a lot of fresh garlic cloves and jabbed them into the meat into little slits I made. I also put a bunch of ground pepper on the meat and then seared all the sides of the roasts in a pan on the stove. I cut a large onion in half and put that in the bottom of the crock pot and put the three roasts on top. The lid just fit on over the top of the roasts. I poured in a cup of tomato juice and a cup of chicken stock and put it on low overnight.

at 7 in the morning it smelled great and I turned it down to warm. I took one of the roasts out and cut another one in half. I put it in a tub in the fridge and poured a bunch of sweet and spicy grilling sauce/marinade over them. About three hours later I took those roasts out of the fridge and put them on the grill, slathering on more sauce when I turned them. I only cooked them for a half an hour as they were already cooked.

They turned out great and my mom commented that she thought the pork was especially tender for having cooked it on the grill. That’s good enough for me since it was her day.

I drained the liquid out of the crock pot and pulled the pork apart and sliced up the onions into smaller pieces. Then I mixed in some sweet BBQ sauce. I kept the crock pot on warm for pulled pork sandwiches and nachos later on when some old friends stopped by for a visit. Those turned out great too.

thanks for the invite you jerk weed.

I drained the liquid out of the crock pot and pulled the pork apart and sliced up the onions into smaller pieces. Then I mixed in some sweet BBQ sauce. I kept the crock pot on warm for pulled pork sandwiches and nachos later on when some old friends stopped by for a visit.

That sounds so good!

I’m hoping to get a propane smoker for my birthday (I keep hinting at that to my boyfriend) to use this summer. Last summer once I was in my house I used my grill just about every night for dinner.

Anyone have good meat smoking recipes!

i wanna get a lil chief smoker

also makes up to 25 lbs of smoked goodness.

I do not have any outlets outside, so I’d have to run an extra long extension cord through my 3rd bedroom (which is the door to the back porch/backyard/grill). Figured a propane would be best to avoid that and the inevitable of a human or dog tripping over it and unplugging it.

I’m throwing a party this Saturday and we’re going to slow cook pork for sliders. Husband is grilling a couple tri tips. I’m making potato/cheese/chili tamales, spanish rice, refried beans, macaroni salad, pico de gallo, artichoke dip, coleslaw plus fruit and a veggie tray. We’re getting a 1/4 barrel keg from our favorite brewery plus margaritas and vodka drinks. We’re putting up a tie dye table for 2 hours. I guess this could have gone in the weekend thread.

How much beer is in a quarter barrel?

Are you in any way concerned you should have bought a half?

I’m always concerned that we need more beer. A 1/4 hold 64 pints. I’m also picking up 4 growlers (each holds around 5 pints) of assorted beers, bitter, red, stout, IPA. People always bring stuff too even though i say it’s covered. Last party we ended up with almost as much beer than when we started.

Fortunately I’m all out of beer and am off to bed. Fortunately for a Monday there wasn’t much to start with.

Balv - I’ve been looking at the little chief smokers. Thinking I’m going to get one for my boyfriend for his birthday (I’ve had my eye on a copper set of pots and pans for mine instead of a smoker). I figured I’d get him that,
Smoking chips, and some ribs to throw in it. 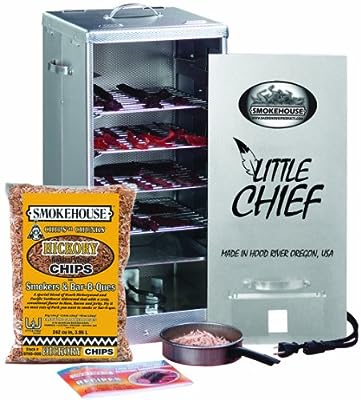 Little Chief front load smoker made by Smokehouse Products is the medium sized version in the Smokehouse family. With a 250 watt element and 4 grills this smoker is perfectly designed for fish, beef, ...

I got some authentic tamales yesterday from my friend Gilberto. He (or his people) make huge batches a few times a year and sell a dozen for $10.

Gil manages a couple bands and has a lot of great stories. He told me he stayed up partying with the Texas Tornados in Detroit after a club closed and they locked the doors. He showed me a picture of him and Flaco Jimenez. He mentioned that Flaco ordered a whole wash tub full of beer before they closed. He also said he and a couple of others had to lift Augie Meyers piano up onto the stage before they could play.

Wow what a great story. Flaco must have seen it all with all the greats he’s played with.

We are crazy slow at work. I’m going to leave early and go to Whole Foods on my way home and then try making this tonight:

I finally got a new stove and got rid of the old pos i’ve been using for years. I haven’t really used the the inside of a stove much due to this. I’m so excited!

I cannot underestimate the value of a new stove.

You can make carnitas with juniper berries, thyme and one bay leaf (courtesy of Chipotle recipe posted online) instead of the burdensome normal carnitas method of orange juice/lime/garlic/tons of other ingredients.

Juniper berries are my shiz now.

I made some less than a week ago…and then didn’t eat any of it. Gave it to a neighbor.

This sounds a lot like the fiery garlick shrimp kabobs we used to do on the grill. Similar ingredients, but we put about six of them on wood skewers, let them soak in the marinade, then tossed them on the grill for a few minutes.