Super happy I have a Spotify account to cancel.

A quick way to get me to think you’re a fucking idiot is to talk about something you heard on Joe Rogan’s podcast or show or whatever the fuck it is.

i stopped listening to rogan after he joined spotify exclusively. I’ve not followed or listened since. just a quick internet search shows I might be better off not listening to him. which sucks cause I always loved his balanced and curious interview styles.

I haven’t used Spotify in about six years. I don’t think I am missing anything.

The dudes who founded Spotify is from Sweden (where I am from). They seem to be dreadful people. Everytime I think of Daniel Ek, in particular, my stomach turns. In a notorious interview, he claimed to be the same regular, humble guy that he was when he was young - the only difference now is that he has all the artists on his playlists on his cellular. I bet my life savings that it is the other way around - that he is just the same bragging slimeball that he has always been.

Never heard of Joe Rogan until just recently, but I don’t use Spotify so I’m not even curious about him.

From Rogan’s wiki:
“He attended the University of Massachusetts Boston but found it pointless and dropped out early.”

Which explains his inability to think critically and evaluate sources. He thought he knew enough and quit before he had a chance to learn. Chump.

Poisonous idiocy passed down to people who are even stupider.

Never liked Spotify but primarily because the way they rip off artists. You’re better off using Bandcamp or buying directly from an artist. Or if you can’t afford it, just torrent the music. Rogan is a dumbass but I don’t have a problem with him being streamed. People can make their own choices.

I think Neil Young’s main beef with them is just that they stream low quality files. He’s just rolled all of this into his existing animosity.

Rogan has had some of the most incredible guests on his program, but yes, his popularity has smashed any humility he had and I only watch the small clips on YouTube now.

He’s the bridge between meatheads and potheads (big audience).

I’ve never been a Spotify listener.

I can’t remember who said it, but someone tweeted something like “Joe Rogan is Goop for men.” I think that is a perfect description.

i actually really like rogan. his comedy is just so-so for me. i don’t know if he’s ever claimed to be a genius…he’s definitely said he’s not a journalist and he’s said from the get go, “listen, i’m doing something i love and having people on my show who i a want to meet or like and whom i want to hang out with and have conversations with.”

he’s also pretty quick to admit when’s he wrong, i believe him to do his best when it comes to fact checking…albeit, it’s just google…who knows, maybe he uses other resources??? but w/ 2 mil followers/listeners he’s got a responsibility to make damn sure he’s not spreading hate or misinformation.

I’ve just finished matt taibbi’s book “HATE INC.” if you all have a chance please read it. it’s an expanded and up to date take on today’s media and goes in great detail and examples of how our media today is tearing us apart…so, go after rogan, but let’s not forget, he’s probably the least of our worries.

oh, and i’ve not listened to him since he got on spotify because i don’t like the interface of spotify and i tend to almost always never finish rogan’s podcast because they’re too long and often boring.

“As it turns out, there is a utility in keeping us divided. As people, the more separate we are, the more politically impotent we become.”
― Matt Taibbi, Hate Inc.: Why Today’s Media Makes Us Despise One Another

“Trump doesn’t happen in a country where things are going well. People give in to their baser instincts when they lose faith in the future. The pessimism and anger necessary for this situation has been building for a generation, and not all on one side. A significant number of Trump voters voted for Obama eight years ago. A lot of those were in rust-belt states that proved critical to his election. What happened there? Trump also polled 2–1 among veterans, despite his own horrific record of deferments and his insulting of every vet from John McCain to Humayun Khan. Was it possible that his rhetoric about ending “our current policy of regime change” resonated with recently returned vets? The data said yes. It may not have been decisive, but it likely was one of many factors. It was also common sense, because this was one of his main themes on the campaign trail—Trump clearly smelled those veteran votes. The Trump phenomenon was also about a political and media taboo: class. When the liberal arts grads who mostly populate the media think about class, we tend to think in terms of the heroic worker, or whatever Marx-inspired cliché they taught us in college. Because of this, most pundits scoff at class, because when they look at Trump crowds, they don’t see Norma Rae or Matewan. Instead, they see Married with Children, a bunch of tacky mall-goers who gobble up crap movies and, incidentally, hate the noble political press. Our take on Trump voters was closer to Orwell than Marx: “In reality very little was known about the proles. It was not necessary to know much.” Beyond the utility that calling everything racism had for both party establishments, it was good for that other sector, the news media.”
― Matt Taibbi, Hate Inc.: Why Today’s Media Makes Us Despise One Another 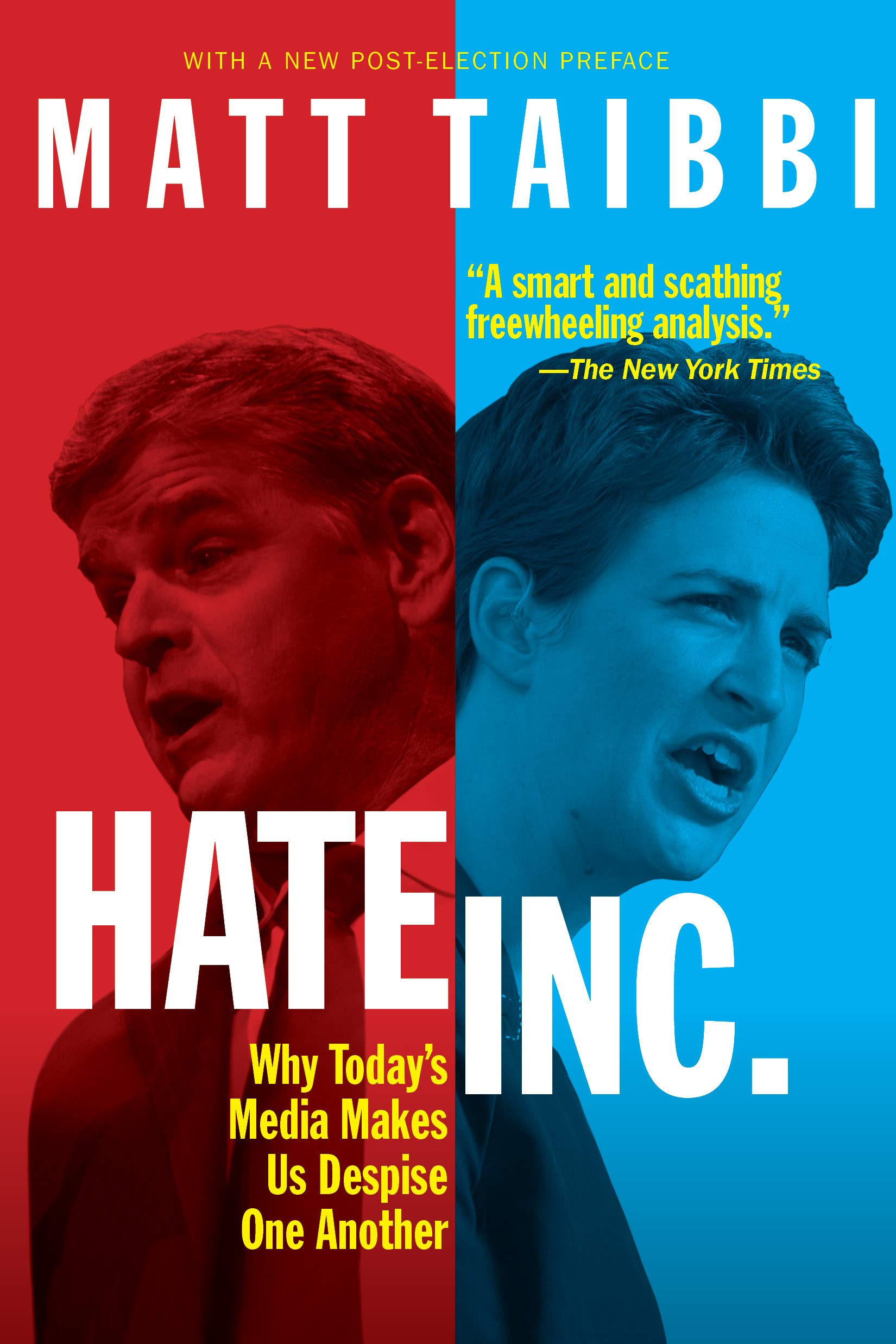 “As it turns out, there is a utility in keeping us divided. As people, the more separate we are, the more politically impotent we become.”

― Matt Taibbi, Hate Inc.: Why Today’s Media Makes Us Despise One Another

His writing is full of specious assertions. That quote alone seems to want to connect a ‘utility in keeping us divided’ and our being ‘politically impotent,’ all while blaming ‘the media.’

So. The media’s goal is to make us politically impotent? That’s his logic there. Sure it’s not the goal of the elected officials?

Sure Fox and the NY Post and CNN are very obviously fanning the flames and appealing to either side of this division, but there are many, many reputable sources and members of the media that, while they have a lean or bias, aren’t trying to exploit that.

To paint the many thousands, tens of thousands of members of the media in that way is to attack their professionalism at the very least, and to ascribe a craven desire for money and exposure that would be slander if worded differently.

Put three people in a room together and they can’t agree on pizza toppings, yet he refers to ‘the media’ as if it’s a cabal where everyone is in on the plan. I’d say his analysis likely is closer to his own feelings on all this rather than a reasoned take that encompasses everyone in the field.

We all seek answers, but should really stay away from gross generalizations and irresponsible assertions in trying to communicate our views.

Even the book jacket blurb calls it a “smart and scathing freewheeling analysis” which tells us it’s one man’s opinion.

BTW I thought it more efficient to dissect that one quote than look at the paragraph, with lines like “When the liberal arts grads who mostly populate the media think about class, we tend to think in terms of the heroic worker, or whatever Marx-inspired cliché they taught us in college.”

trust me. i hope you do, you’ll have to read it. he drags em all through the mud. msnbc, fox, times, la times, etc etc …from the time they blundered and fucked up the wmd (through the govt’s own misinformation and the journalists’ lack of fact checking) right down to the 2016 campaign and on

sorry for the quotes. i just snagged a couple. not sure how familiar you are with taibbi but he’s one of the best and most respected journalists out there. the fact the he’s citing tons of stuff to back up his opinions and assertions speaks for itself and he himself has been on the cutting room floor w/ his years of experience in the media muck.

i’m all for journalists, but let’s not forget, they tend to do as much as they do good. taibbi included (sometimes).

There are about three journalists left.

Matt Taibbi
Chris Hedges
and I forgot the other one.