I got tickets in the orchestra section for Ray LaMontagne on Oct 25 in Bethesda, MD. Really looking forward to this! 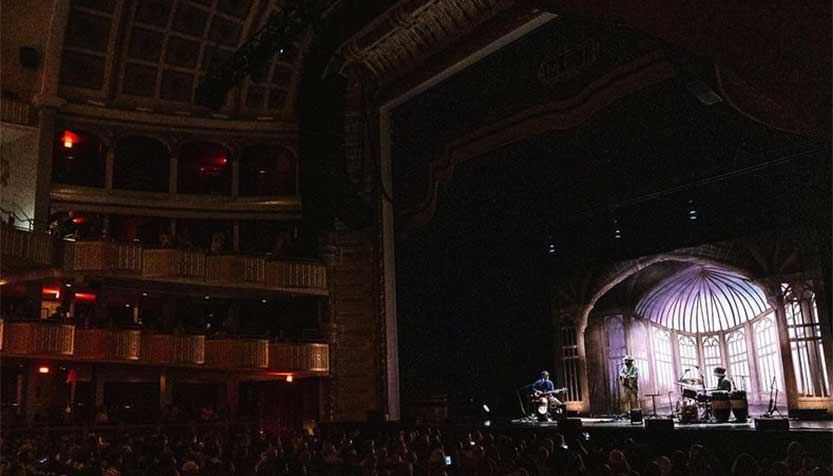 "Both LaMontagne’s craftsmanship in the composition of these songs and his easygoing, unaccompanied playing will come as comfort food to established followers who should welcome this most organic return to his roots." –American Songwriter

This show was just announced and I’m planning on going. He’s so great. Nothing coming close to me this tour.

This show was just announced and I’m planning on going.

Rodknee ( @thebalvenie ) will be happy to hear that when he gets back!

I got the email last night! I just got my ticket for MD on Sun Jan 22

MD is already great – Ray LaMontagne next week in Bethesda, Isakov in Baltimore in January

So, Ray LaMontagne was fantastic.

He had a bassist, who also had foot pedals to play a bass drum and snare. A separate drummer, who had a keyboard next to him; and his own guitar for random lead stuff. Ray’s guitar playing is nuanced and intricate and energetic all the same. I think he’s playing Yamaha acoustics now (compared to that Martin D-18 he’s had in the early days); he’s got this really nice pair of 000-sized ones.

The sound was beautifully done; the way Ray’s guitar blended with his harmonica was just perfect. Also, I almost forget how good of a harmonica player he is.

The opening act was Lily Meola; I’ve never heard of her before, but she has an incredible voice. Her songs were really very good. I definitely recommend checking her out. I listened to her EP on the way into work today. She was funny (she covered Fleetwood Mac’s Dreams towards the end, and made sound effects to fill in the guitar solo

) and just totally blown away being in that theatre opening for Ray, that was evident. Then she’d turn around and belt out an amazing melody with all the poise and control of someone who’s been playing for years.

As expected, Ray is terribly shy, but very genuine and thoughtful in how he talks to the crowd. Often rambling, finding his way to a point. He had some really beautiful comment about finding our way through life and keeping the good people in your life, before he mentioned how he wrote We’ll Make It Through (from the Monovision album) for his wife. He was very candid about his mom and dad growing up; he didn’t talk a lot, but he made all the words count.

There were so many good songs, but perhaps my favorite/the most beautiful was Rocky Mountain Healing, which he said he wrote as they were driving into Colorado and he was watching the sunrise over the mountains, up front with the bus driver. Felt like a scene from Almost Famous. He did that one with an extended intro, played slower with a heavy dose of harmonica that was just brilliant.

Anyway, a beautiful night, and a beautiful venue. And I bought Monovision on vinyl; I do this now with albums that I find essential to me. And I met a pretty girl sitting next to me and got her number. So there’s that

Awesome. You already know she likes good music. That’s half the battle.

I truly love Ray. We saw him a few months ago, similar experience. I wish he came around more.

We saw My Morning Jacket last night. This was the make up for the two shows this summer that got canceled bc Jim had Covid.

It was at the arena but it sounded great. Performance was beyond excellent. I would have changed out a few songs for a better set, but hard to complain about nearly 3 hours with no set break from the best live band on the planet. This is interesting. I was surprised at a few shows recently, when there was no encore, but I guess it may no longer be a thing. Thanks, millennials.

Has the encore left the building?

Once a given in live concerts, the encore is now seen by some as a showbiz artifact rather than an authentic exchange between performer and audience.

Well, in true millennial fashion, I can’t read this because of the paywall.

True, but to add a real millennial touch, one would have to point out that not reading paywalled articles is morally superior and brave.

I hate how clever this is. How am I a stereotype for not wanting to get news through some mogul’s biased tri-state conglomerate? You got me. Set ‘em up, knock ‘em down.

I love you too.

Seems like most bigger acts are timed to curfew. I see smaller acts still getting natural encores. But I’m old.

I’m old too.
I’m getting encores at the shows I go to.

I’d feel upset without one.

I followed Amanda Shires’s tour from Madison to Omaha. Three really great shows. The show in Omaha was in a small cocktail bar. It was the last show of the tour, and she ended the show with a Harry Styles song dancing through the crowd. The highlight each night for me was her version of Highwomen.

Went down to the State theater yesterday to buy Gregory Alan Isakov tickets, there were only a handful left but I scored a couple. I only purchase tickets on the few days they offer tickets without Ticketmaster fees.

Then I asked if there were any tickets left for the Greensky Bluegrass show last night. They said there were something like 7 singles left so I took one. They are from here in Kalamazoo and come home every year for a couple shows around Thanksgiving. It was a really good show and I had a good time.