I also met Lou Ferrigno when I was a young boy. It was during the height of his celebrity. I want to say this was around 1981. I would have been 10 years old. Anywho, it was at a charity something or other. Also met Jerry Reed and the Hosts of That’s incredible . I remember staring at Cathy Lee Crosby’s tittahs. Was also probably the year I started tugging my milk tube.

Did you win Ben Stein’s money?

Dems are having their own Tea Party moment. Reps handled the potential split by giving the movement a signal they would be included by putting TP Queen Bee Palin as a VP nominee in an election they knew they had no chance of winning. Instead of placating the crazies it emboldened them and (IMO) this is the event that gave us Trump.

As good as many of the far left policies seem on paper I don’t think the party should bend as far as many of my compatriots believe because all of these programs are predicated on the assumption that whomever occupies the Oval Office will be a person of decency and kindness. For example; let’s say we had top-to-bottom universal government healthcare (and assume we could afford it). What happens twenty years from now when Donald Trump Jr gets elected and determines that those that are new citizens haven’t earned access yet. Or those who are in families that haven’t ‘been here long enough to be real Americans’ should not have access? Or that people who live in states that have not sufficiently kissed the brown ring should be somehow punished by limiting access through crooked legislation?

As much as I support Yang for bringing issues to a public space that are more in line with where we will evolve as a society, if someone has a better chance of ejecting Trump I am voting for them in the primary. Just because the Reps nominated a loon doesn’t mean we can win with one. We don’t have the same “support” that Donald enjoyed. Give us a centrist that will win back the voters that flipped from Obama to Trump and let’s be done with this god damned nightmare.

On the other subject: I worked on the Paramount lot and met many celebrities. Fred Willard, basically everybody from Deep Space Nine, The cast of Frasier, Andy Richter, etc. My favorite of which is meeting Gary Busey twice. The first time was late in the evening. I had heard him on Howard Stern in the morning spouting off self-help acronyms. I remembered one was “You know what trying is? T-R-Y, Tomorrow’s really yesterday”

Both times I met him I walked by him and tapped his shoulder, leaned in and whispered “Tomorrow’s really yesterday” in his ear and then ducked into an office and hid where he couldn’t find me (though he looked both times). I like to think he thinks I am his guardian angel. If I am, he surely has a score to settle.

We tried a centrist last time?

Hillary was a lousy candidate. In 2008 she was trounced by a black junior Senator from Chicago with little to no name recognition. Obama is a solid politician, but anybody with even a lukewarm serving of juice should have been able to bury his campaign.

I did not win Ben Stein’s money.

How late was he?

He was actually so cool and nice and seemingly normal, even though he is not.

So Tulsi Gabbard is suing Hillary Clinton. Who is going to win? Trump.

Get it together you selfish assholes.

Get it together you selfish assholes.

Hillary isn’t running and Tulsi won’t be the nominee.

If this was a dispute between the three top tier candidates, I’d be concerned.

Hillary is awful for the party and should find an outlet. In a Hollywood Reporter interview she recently trashed Bernie saying no one likes him. She’s hawking a Hulu Documentary titled Hillary. I’m sure it’s chock full of externalizing, self-aggrandizement, and zero self-reflection.

Bernie is in the top three in most polls, so Hillary is doing more to help Trump than anyone.

no one likes him

Who knew Hillary is a valley girl?

Hillary isn’t running and Tulsi won’t be the nominee.

No, but the bullshit bickering is indicative of the health and condition of the party.

Do you think Trump will not make hay with this? And well he should. They’re acting the housewives of wherever, or this: 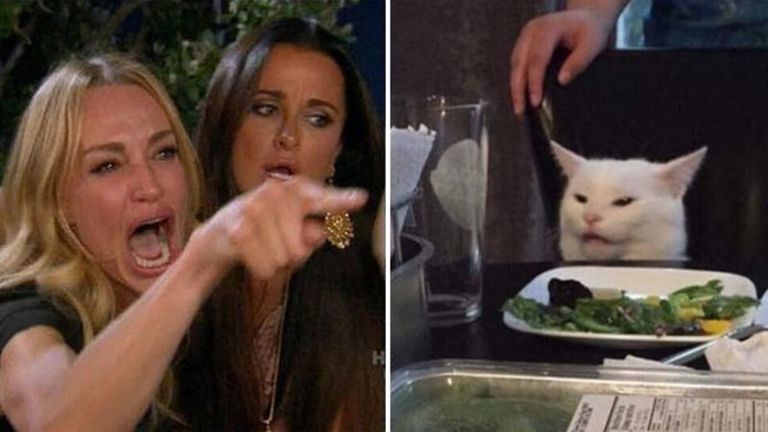 It’s fucking cartoonish petty garbage and not what I expect from people who have enough clout to get on CNN debates representing the party I support.

bullshit bickering is indicative of the health and condition of the party.

Hillary accused Tulsi of being a Russian asset.
Hillary says no one likes Bernie.

I don’t think Hillary represents the party. She’s part of the old machinery that helped get Trump elected. I’m not sure why anyone pays attention to her at all.

At least she’s really showing her ass now. Thanks.

Remember how Brian Wilson set up a fake mixing board for his dad Murry to feel like he was doing something during sessions?

Can we start a gofundme to arrange for a fake documentary crew to follow her around and interview her 24/7?

I was working on a low-budget indie film, and Ron Palillo, ‘Horseshack’ from the Barney Miller TV show had given some funds to the production in exchange for a small role in a scene.
The day came to shoot it, and the director told me not to bother loading film into the magazines ( I was clapper/loader, not camera man). He didn’t want to waste the film stock. We shot all Ron’s scene with no film.